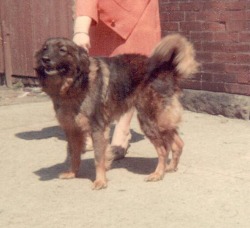 My very first dog was SPARKY.
She was a tiny little mongrel puppy my father brought home to me in his coat pocket.
Sparky was my best friend growing up and she lived to the ripe old age of 18. 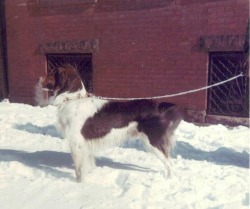 I remember the day we found JUDGE.
He was trotting down the street on a rainy April day.
He was muddy, wet, filthy.
I said to my sister, "Look at that beautiful dog." I think she thought I was crazy, but we called him and brought him in.
He was a friendly, happy-go-lucky dog. And a joy to live with.
He was loaded with character. Judge lived to 15 years of age.

My Mother found AUGIE-DOG hiding under a parked car on our street in Philadelphia.
She asked me to go out and get her. We were never able to find her owner,
but she lived with us the rest of her life.
You couldn't have asked for a sweeter little dog.
Augie-Dog was 18 when she passed away. 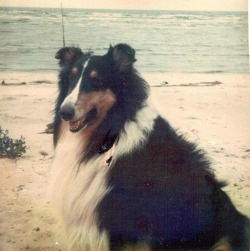 All my life I had wanted a Collie. I'd read & collected all the Terhune books.
So I was thrilled when I got my first Collie.
He was a 10 week old Tri male, and I named him HANDSOME DEVIL.
And boy, was he!! What a love he was, so sweet, and so gentle.
Devil lived 10 very happy years with us before he passed away. 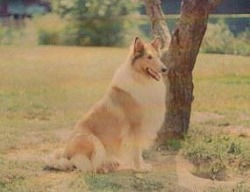 Shortly after we added a pretty little Collie bitch to our family.
LADY JANE was 3 years old when she came to live with us. Frightened of men and much else,
she learned she was safe and led a happy life with us for 5 years more.
Sadly she was killed instantly by a car when she escaped through an open gate. 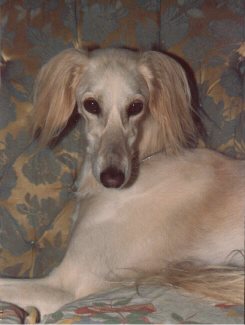 While working at a kennel I came across a photo of a Saluki in a dog magazine.
I instantly fell in love. I coveted a Saluki for many years, not believing I could ever have one.
In 1972 I wrote to SCOA asking for more information about the breed. I learned about Saluki World, subscribed, and read and reread it cover to cover.
I was fascinated with Judith Myrer's Omega Salukis. I corresponded with Judith over the course of the next years.
The result was my very first Saluki, Mandy, which resulted in a lifelong love affair with the breed.

MANDY was my soul mate, my heart dog. She lived 16 years with me,
and brought me more joy than I had ever known before. I was truly priviledged
to have this sweet, funny, loving bitch as my friend. 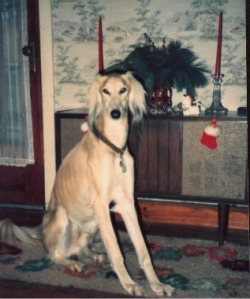 I was so pleased with Mandy, that two years later we brought home
another Omega puppy, REFKY. He was truly a character, much along the lines of Judge.
A beautiful dog, sweet and comical. We had him only 9 years
before we lost him to prostate complications. 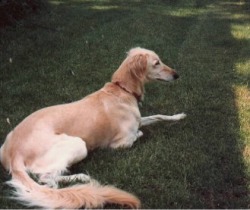 Two year later, our third Omega Saluki joined our home. BOGEY was a happy & sweet boy.
He was such a love. We he was 13 years old he passed on while laying at my feet.
A peaceful passing for a peaceful boy. 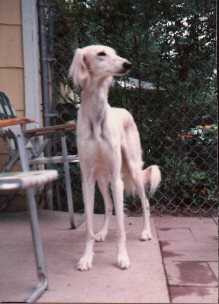 MOLLIE came to us at 10 months of age.
Frightened of everything, it took several years for this beautiful bitch to blossom into a trusting & happy Saluki.
But she did and she was a joy to live with. On the morning of what was
to be her very first dog show, Mollie stretched, made a tiny noise
and died of a heart attack. She was only 6 years old. 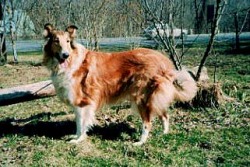 Our third Collie came to us as a young puppy.
RACHEL was a wonderful addition to our family.
A true Collie, loving and loyal.
We had 10 wonderful years with this pretty girl. 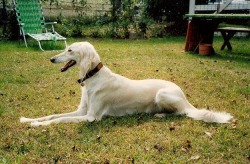 After the heartbreaking loss of Mollie, we went back to Omega Salukis
to add the gorgeous JAMIE to our home.
Not since Mandy had I had such a heart-dog. Jamie was my soul-mate.
Very sadly, we lost her way, way too young during
the whelping her A litter to Altaya Laertes.
She was only 4 years old. I still mourn her. 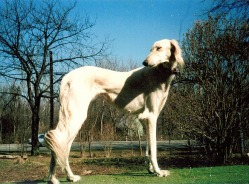 When Jamie was three months old, we decided to add her litter sister, AMELIA,
to our home. Very different in personality, but equal in beauty,
Amelia was a very laid back Saluki. Often you didn't know she was in the room.
She lived with us for 10 years before laying down one day and passing away
as quietly as she had lived her life. Such a sweet girl.

When we brought Jamie home, we started looking for a suitable mate for her.
Unable to find one that suited me, we decided to import the
beautifully bred and totally handsome Altaya LAERTES from Great Britian.
Laer arrived a full of energy 3 month old puppy. He captured everyone's hearts.
When we lost Jamie during the whelping, Laertes spent the
next 5 weeks lying in the whelping box helping our Collie, Rachel to help raise the litter.
We lost him much too young to a blood infection. 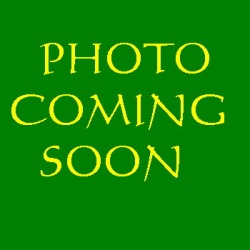 Aslan was the first born of the Laertes & Jamie litter. He was given as a gift to friends of ours. For the first three years he led a happy and wonderful life, but when divorce entered the picture, I quickly found out I needed to rescue this loving boy. Rescue him I did. I placed him in another home, but that didn't work out. Aslan returned here at age 4, to live out his life with us. He was a sweet, if stubborn boy. 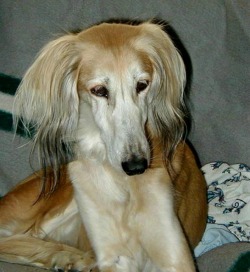 After losing Jamie, there was no question we would be keeping her daughter, ADRIA
Equal in beauty to her mother, Adria became my soul-mate.
She was the sweetest girl. We were blessed by
having her with us for a long time before she passed away one month
shy of her 16th birthday 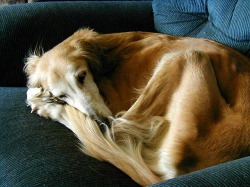 DODGER was Jamie & Laertes's youngest son.
We decided to keep him as well as Adria. Dodger has been a gentle boy all his life.
Just a real sweetheart. At 16 Dodger is still a gentleman. 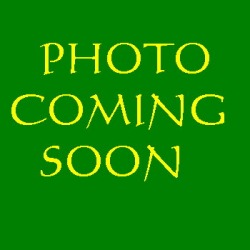 We had been thinking of getting a puppy for our little girl, Ashley. I was thinking Saluki, but the Lord had other ideas. One day while driving down our back road, I saw all these little black puppies. As I approached them on foot, all of them took off up a lane. All but one little girl. I picked her up, she kissed me all over. I knew Katie was Ashley's puppy. We found out later, she was 3/4 Lab, 1/4 Dalmatian. Katie was a devoted companion to Ashley for 10 years. 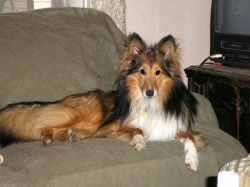 My husband, Chuck, decided he wanted a dog of his own. A little dog, a lap dog. After debating over several small breeds, we decided on a Shetland Sheepdog. I found a 10 week old puppy and brought him home. He immediately took an intense dislike to Chuck, and made it very clear he was MY dog. A noisy and hyper little guy, Dubbie nevertheless adores me and is my constant companion. In 2016 Dubbie started being listless, and a few days later he died next to me on the sofa. I still miss him so much. 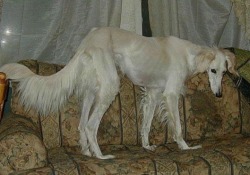 Daphne came to us at age 3 through STOLA, a Saluki Rescue. Raised the first three years of her life in a kennel with very little human interaction, she was terrified of everyone and everything. She was terribly depressed when she came here. I'd sit and look at her "dead" eyes and just cry. I didn't think we'd ever get through to her. But with constant love and gentleness, Daphne has accepted our love and is now a happy and almost carefree girl. She loves attention and being told how beautiful she is. Living to the nice age of 13, Daphine passed away in June of 2013.

It had been a long time since I'd had a Saluki puppy, so I talked Chuck into one. Happily, her breeder, Carol Smith had just recently had a litter and we were able to bring home our new baby, Abby. Our very first non cream/fawn Saluki. This beautiful and exotic grizzle was a joy from day 1. She was a huge help in bringing Daphne out of her depression. Hard to be depressed when a silly puppy is engaging you in play. She's captured the hearts of the whole family, and Chuck finally has his dog. Not a lap dog, but he adores her. 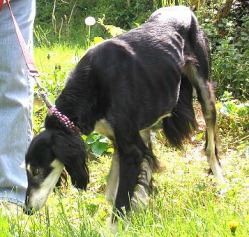 Atireh came to us through STOLA. Another rescue, this girl too took her time coming around, but what a dear she is. She is still very shy of strangers, but she is learning to trust. She's beautiful and an absolute angel. Atireh passed away in my arms in July 2010. I miss her terribly. 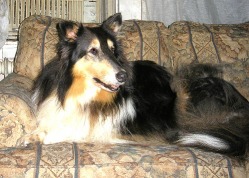 Jenna came to us from the local Collie rescue at the age of 11 years old. What a funny girl she is. She is totally socialized and shy of no one. She has been here almost 2 years now and has decided she likes living indoors. Jenna was put to sleep in 2009. She'll be missed. 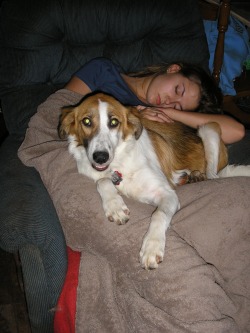 We were transporting several dogs, this one among them, and my daughter feel in love with this 5 1/2 month old puppy. Her and Chuck worked on me until I agreed to go back and bring this sweet girl home. Sarah doesn't have a mean bone in her body, she's just the sweetest barbarian in the world.  :-)

​When we moved to our smaller home, Sarah went to live with her "Mommy" and has been joined by several brothers and sisters.  :) 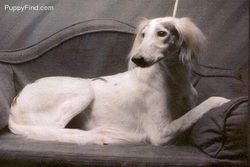 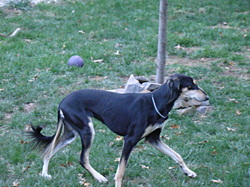 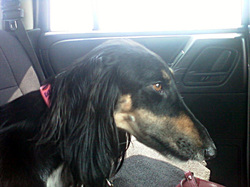 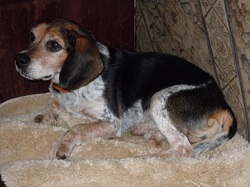 We found Shorty stuck in our root cellar, soaking wet and freezing. We searched for her owners, but to no avail. We think she was probably on her own for a long time. We could tell she was pretty old and not in the best of health, but the 4 or 5 months she lived with us, she was a dear. Always sweet, she was put down when we realized she was in pain in early 2012. 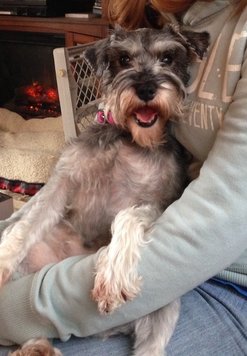 After we moved to a smaller home, Chuck decided he wanted a dog just for him. A little lap dog. We found Ariel at a local rescue and it was instant love between him and her. The litle Miniature Schnauzer had been raised by an elderly lady in KY. When the owner had to be put in a nursing home, Ariel was surrender to a kill shelter. Pulled out because she was so sweet, she traveled to PA. She came to live with us shortly after. I wasn't sure I wanted a non-Saluki, but Ariel convinced me with her sweet and funny nature. Look at that happy little face. She's a joy in our lives.